What Does it Mean for an Instrument to be Intrinsically Safe?

One of the most common and preventable hazards in an industrial workplace deals with flammable and explosive materials and atmospheres. A hazardous area can contain gases, liquids, dust and vapors that may combust if the right conditions are met. Instruments used in areas where these conditions exist are required to have innate qualities or features that eliminate the possibility they will be the cause of a combustion event.

Most countries are subject to International Electrotechnical Commission System for Certification to Standards Relating to Equipment for Use in Explosive Atmospheres (IECEx). To comply with IECEx standards, an instrument must be approved by one of the certifying bodies, and for many that is ATEX. So what does it mean for an instrument to be intrinsically safe?

For an explosion to occur three ingredients are required: oxygen, a flammable substance (fuel) and an ignition source. If you work in an industry that deals specifically with flammable substances, such as an oil and gas refinery, eliminating the fuel from the environment isn’t always possible. If your refinery is located on Earth, you’re going to have a hard time eliminating air, which contains oxygen. However, the element that is usually manageable is the ignition source. Intrinsically safe instruments are designed in such a way that minimizes their threat by eliminating or by isolating any ignition source.

In an environment containing dust, vapor or gas that may be combustible, there are three main methods to limit the danger of ignition. Most intrinsically safe calibration instruments employ some combination of these methods in order to achieve their required safety specifications.

To be intrinsically safe, instruments need to meet these standards even if there is a fault in the system. This means that if the instrument malfunctions in a manner that could make it unsafe, there is a back-up safety feature to ensure it doesn’t cause an explosion. Instruments are often equipped with back-up systems, safety shut-offs and protective housings in order to ensure they are safe to use even in the event of a fault or multiple faults. The level of safety is determined by IECEx and ATEX. ATEX has defined different zones and product categories in order to distinguish which instruments may be used in what environments. 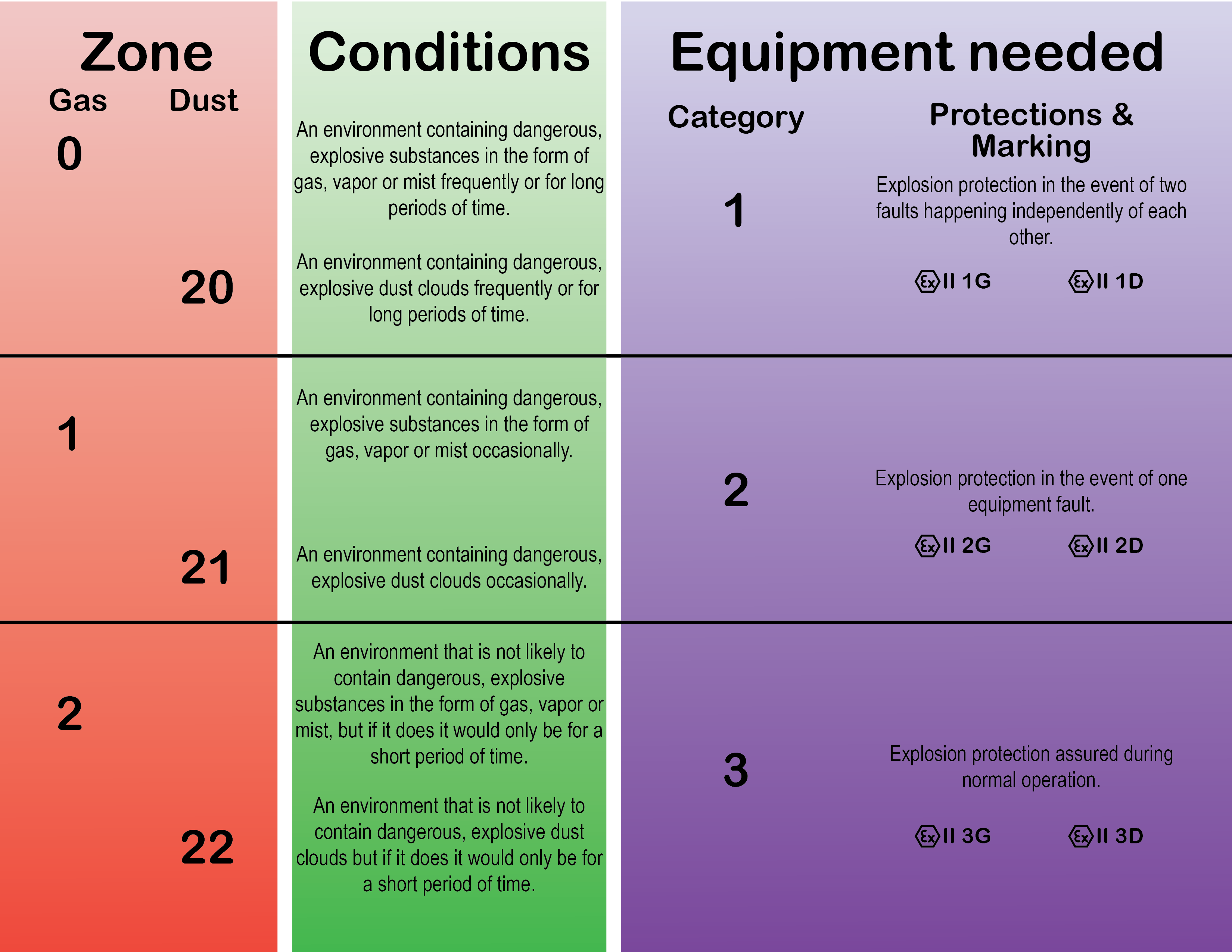 The ATEX zones with the highest safety standards to meet are those with constant exposure to flammable and combustible substances (Zone 0). In the lowest rated (Zone 2), an instrument isn’t likely to be exposed to flammable materials and therefore just needs to operate safely in normal conditions. 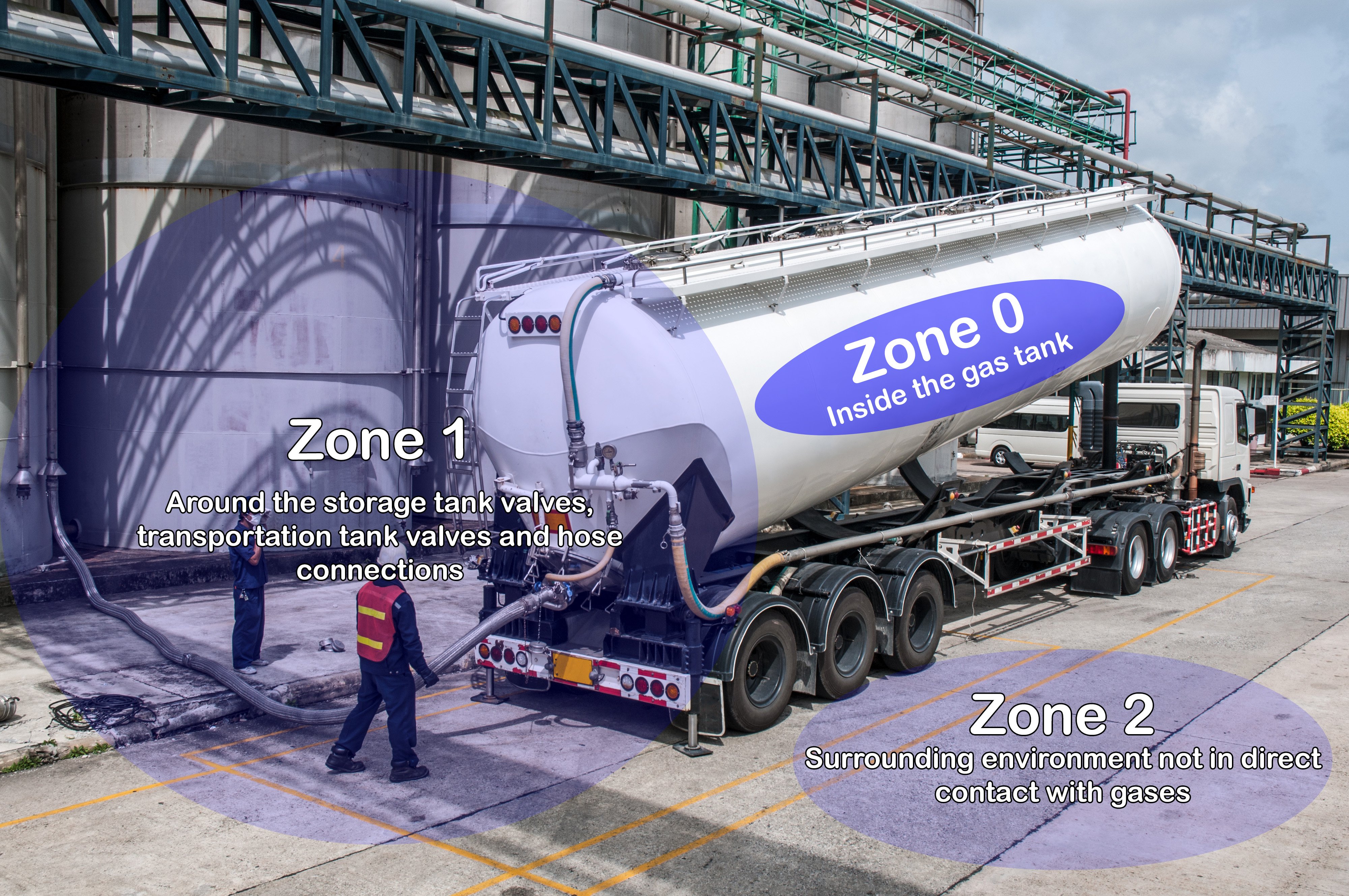 An example of an intrinsically safe device is the CPH7000 Portable Process Calibrator. It is part of ATEX equipment Category 2 meaning that it can be used safely in Zone 1. To receive this certification it needs to operate safely in the event of one system fault. To achieve this, the CPH7000 has a lithium-ion battery in a specially cast protective sheath. This sheath prevents the device from overheating in the case of a system fault such as a short circuit. It also features an emergency interrupt function which throttles the device’s power if it rises excessively. The battery never supplies more than 24 mA of current or 30 volts. In the unlikely event a malfunction occurs causing the instrument to surge in power, the safety interrupt would keep the power supply under the 24 mA/30 v maximum. In a power surge scenario where the instrument risks overheating, the protective sheath enclosing the power source would also keep the instrument's surface temperature below the flashpoint of the surrounding environment.

These two features together are what make the CPH7000 Handheld Calibrator intrinsically safe in a Zone 1 environment. Intrinsically safe instruments must have redundancies and fail safes in order to ensure that in the unlikely event one system safety feature fails, there’s another to take its place. These features allow for on-site calibration in potentially hazardous areas such as petroleum and natural gas plants, food plants and pharmaceutical plants.

Intrinsic safety requires specific measures in different environments and for different types of instruments. Equipment that is certified as explosion proof or intrinsically safe has been inspected and approved to be safe to use in its specified zone. Users can be assured by the certification logos that their equipment can keep their facilities running efficiently and their crews working safely.