Ever wonder why your pressure controller may perform perfectly for one calibration but poorly for the next?

When changing a controlling/measuring volume, pressure range, pressure source or connection interface, the controller has to adapt to a changing rate of pressure flow. This is the core principle to a stable controller output. A controller’s adaptability is derived from its ability to detect and manipulate the flow of pressure from the control source to the device under test (DUT). This is critical for pressure controllers and is one of the main characteristics that make one controller superior to another. 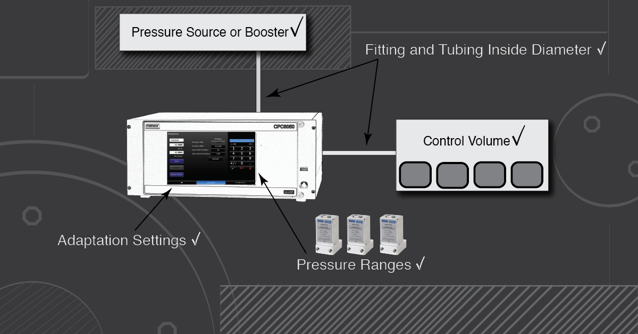 Within most pneumatic applications, the volume is a critical factor that will affect a controller’s performance. For pressure controllers, the term volume refers to the total volume of the measurement chain that needs to be pressurized by the controller: internal controller volume, tubing/piping, any manifolds, and the DUT internal volume. Whether a pressure controller is being used in a production environment or a calibration lab, it is very rare that the DUT volume will remain the same for every application. Usually a small volume change (≤50 ml) will not create a significant performance change on the controller’s output, but as the volume increases, the control algorithm may have difficulty calculating the proper pressure rate to maintain a stable output.

Another attribute of a changing volume is the likelihood there will be a more significant temperature change in the system during pressure changes, as described in the Ideal Gas Law, PV=nRT. If controllers are not able to quickly adapt to fluctuations in volume and temperature, they may behave erratically, causing overshooting or undershooting when approaching a set point.

Changes in DUT pressure ranges can also have an adverse effect on a controller’s pressure output. Controllers typically have multiple reference transducers built into them in order to maintain accuracy over a wide range of pressures. If the DUT span does not fall near one of the internal transducer ranges, the instrument may have difficulty maintaining a stable output in relation to the percent of the DUT range. In order to protect the DUT from overpressure damage, some controllers will allow users to input different pressure ranges to limit the controller from outputting ranges outside the DUT range. However, these changes don’t actually affect how the controller manipulates the pressure rate. Only controllers that utilize some sort of adaptation feature will allow the instrument to adjust its output to satisfy a specific DUT range.

Many handhelds and even desktop pressure controllers are not meant to be completely stationary.  This is one of the big benefits of having a lightweight, portable controller; they can be moved between different environments like a calibration lab to the production floor, or even between two entirely different facilities. Although this is a great feature of most pressure controllers, it also comes with its own set of risks and obstacles that will need to be addressed.

Probably the most critical requirement for any pressure controller is the pressure source. For many handhelds or portable desktop instruments, this comes in the form of an internal tank or pump. For the majority of desktop controllers, this source will come from a larger pressure source that is often used to pressurize an entire production or calibration environment. This will typically be in the form of a large nitrogen bottle, an industrial size air compressor, a booster, or a combination of these sources. The tricky part comes when moving the controller from one source to another.

As stated earlier, the output of a pressure controller is determined by how it controls the rate of flow through the instrument. If the instrument moves from a stable nitrogen bottle to more volatile source, like a booster, the controller will be need to be able to compensate for this changing pressure source. Some controllers will use a pressure input sensor to allow the instrument to constantly monitor the pressure source value. Others will try to automatically calculate this value as it’s controlling, while some, like the CPC8000, have adaptation features that will run in order to alter the controller’s output based on the source.

Another source of inconsistent output from a controller is the connection and hose interface between the controller and the DUT. The orifice sizes throughout the process connections, tubing diameter, tubing length and any other pressure restrictions will affect the pressure rate and output. For instance, a controller that is used in one environment operating with a 3/8” tubing line to a large orifice manifold will allow pressure to flow freely and the instrument can easily control pressure rates. This same controller may perform completely different with a 1/8” tubing and small orifice connections, even if the pressure sources, volumes and ranges are the same. The ability for controllers to manipulate their output based on these restrictions is another obstacle that the control algorithm must address in order for the instrument to provide a stable and consistent output.

Although some controllers use the input pressure source sensors or constantly correcting regulator algorithms, the adaptation feature built into the software of Mensor's CPC8000 is a great way to address any or all of these problems the user may encounter. The CPC8000 High Pressure Controller can save up to eight unique pressure configurations for different volumes, pressure rates, pressure sources or pressure ranges. This special feature allows users to do a single run in each condition and it can permanently save the calculated output manipulation to a different configuration. After the configurations are saved, the user simply has to select the proper file and the instrument will perform within the specified stability window in any environment.

The following video features a demonstration of how to use the adaptation application to calibrate multiple ranges and volumes with one controller:

When thinking of pressure controllers and their application, the maximum/minimum pressure and accuracy of the device are commonly the first things to cross one’s mind. But, a controller’s ability to maintain a pressure rate and stable output are two of the most desired features. While some users may only use a pressure controller in a single environment, the increasing need for a device that provides more flexibility to adapt to different environments is more apparent than ever. Moving a device from location to location or allowing a single controller to have an array of devices connected to the process port will add significant cost savings as opposed to having a different controller for each application. With this knowledge, the next time you’re considering a pressure controller, adaptability may be at the top of your list of requirements! 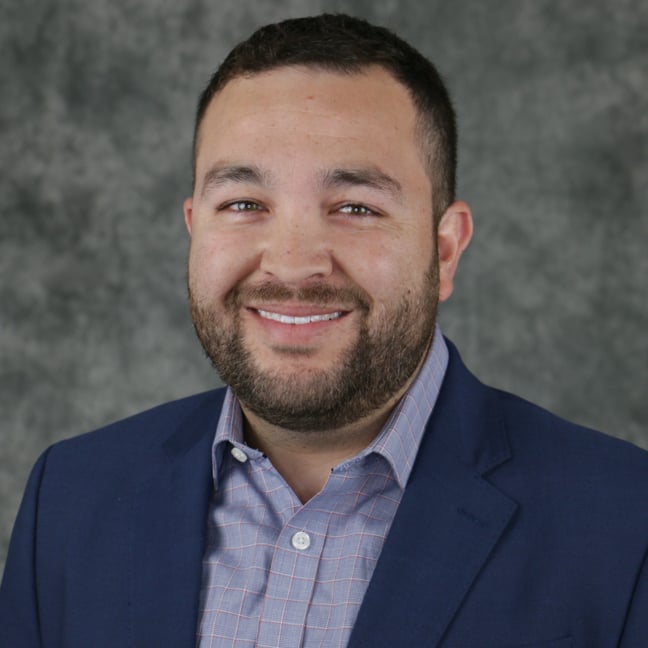